In drug development and toxicological risk assessment, compound testing usually starts with in vitro experiments and is followed by in vivo testing using rodents as a mammalian model. This practice assumes that animal models respond to active substances through similar mechanisms. Recent inconsistencies in translating findings from animal models to human clinical outcomes (Knight, 2011), as well as animal welfare concerns, have led to the development of increasingly more sophisticated in vitro systems mimicking even the most complex tissue structures (Iskandar et al., 2017; Zanetti et al., 2016).

In vitro models capture events efficiently at molecular, cellular, and, at best, tissue levels and can be used to study transport rates across epithelia, toxicity, and mechanism of action (Fernandes and Vanbever, 2009). However, the fourth level of biological organization, which includes the physiological functions of an organism, can so far only be mimicked in the whole animal (Barré-Sinoussi and Montagutelli, 2015; Choy et al., 2016). 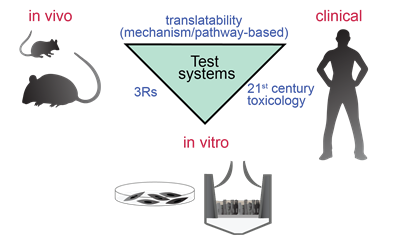 In addition to physiology, the organ of a living animal has advantages over in vitro models, especially in a disease context. For example, no in vitro model can adequately mimic COPD, an important adverse outcome caused by cigarette smoking. The complex pathogenesis of COPD includes inflammatory cell infiltration, goblet cell hyperplasia, cilia dysfunction, squamous cell metaplasia, and emphysema of the lung (Adamson et al., 2011). While ciliary dysfunction, mediator release, and goblet cell hyperplasia can be achieved in an in vitro setting, the C57BL6 mouse model comes much closer to mimicking the structural tissue alterations characteristic of emphysema (Sasaki et al., 2015). The role of the immune system, inflammatory cell infiltration into the lung, and lung function as a whole can also be better addressed in an animal model (Fricker et al., 2014). The C57BL/6 model is also suitable for testing aerosols generated by e-vapor and heat-not-burn products (Ansari et al., 2016; Phillips et al., 2015).

However, considering the genetic differences between species, it is crucial to gain a detailed understanding of the similarities and differences between the experimental test system and the human disease or mechanism(s) that it is intended to model.

Hence, the mechanism-level conservation between species becomes more important than gene-level conservations. Importantly, mechanism-level comparisons will enable the identification of so-called “translational biomarkers”, which are representative of the behavior of key mechanisms. Equally important, the identification of the dissimilarity in disease pathways between species can highlight the value and limitations of a given model (Miller et al., 2010). The co-expression analyses can be conducted using an in vitro setting to establish convergence and divergence in cellular processes that contribute to specific pathologies in humans and animal models (Mueller et al., 2017; Rhrissorrakrai et al., 2015). This way, the in vitro research serves as the “adapter” between rodents and humans.