TOXICOLOGICAL ASSESSMENT IN THE 21ST CENTURY

The quantitative assessment of the risk reduction potential of candidate and potential MRTPs involves (i) the use and/or development of state-of-the-art methods in regulatory and systems toxicology, (ii) a deep knowledge of the mechanisms that lead to smoking-related diseases, and (iii) expertise in the design and conduct of clinical studies aimed at substantiating reduced exposure and risk in adult smokers.

Toxicity testing is at a turning point now that long-range strategic planning is in progress to update and improve testing procedures for potential stressors. The U.S. Environmental Protection Agency (EPA) commissioned the U.S. National Research Council (NRC) to develop a vision for toxicity testing in the 21st century (Committee on Toxicity Testing and Assessment of Environmental Agents, 2007; Krewski et al., 2010; Thomas et al., 2013) to base the new toxicology primarily on Pathways of Toxicity (PoT) (Basketter et al., 2012). The report by the NRC envisions a shift away from traditional toxicity testing and toward a focused effort to explore and understand the signaling pathways perturbed by biologically active substances or their metabolites that have the potential to cause adverse health effects in humans.

This understanding should allow researchers to:

Systems toxicology (Sturla et al., 2014), or 21st century toxicology (Hartung, 2010), aims to create a detailed understanding of the mechanisms by which biological systems respond to toxicants so that this understanding can be leveraged to assess the potential risk associated with chemicals, drugs, and consumer products. For example, to determine whether a candidate MRTP has the potential to reduce disease risk, its biological impact is compared with that of a reference cigarette (e.g., 3R4F cigarette) on a mechanism-by-mechanism basis.

The identification of pathways of toxicity is imperative in order to understand the mode of action of a given stimulus and to group together different stimuli based on the toxicity pathways they perturb. The first component of the vision focuses on pathway identification , which is preferably derived from studies performed in human cells or cell lines using omics assays. The second component of the vision involves targeted testing of the identified pathways in whole animals and clinical samples to further explain toxicity pathway data. This two-component toxicity testing paradigm, combined with chemical characterization and dose-response extrapolation, delivers a much broader understanding of the potential toxicity associated with a biologically active substance. Systems biology plays an essential role in this paradigm, consolidating large amounts of information that can be probed to reveal key cellular pathways perturbed by various stimuli (Sturla et al., 2014). Of importance, moving to mechanism-based assessment comes with its own challenges and requires new ways to assess literature data (Health and Services, 2014; Smith et al., 2016).

Importantly, omics technologies used to characterize the effect of different exposures molecularly also allow detailed descriptions of what each individual is exposed to (i.e., the exposome). For example, the EXPOsOMICS consortium (Vineis et al., 2017) aims at characterizing the external and internal exposome in relation to air pollution and water contaminants (Turner et al., 2018). Methods developed in this field are relevant to Tobacco Harm Reduction science, and vice versa, so a conversation between the relevant stakeholders through community platforms, such as INTERVALS, is highly relevant.

Furthermore, 21st century toxicology has identified the promise of new technologies and the need for large-scale efforts. Aligned with the 3Rs strategy — which states that animal use in scientific research should be reduced, refined, and replaced — in vitro studies using relevant test systems and systems biology approaches offer new prospects in the field of human toxicology (Daneshian et al., 2011). It is important that synergies are established between different laboratories to ensure that the best possible methods are developed and validated for regulatory consideration. 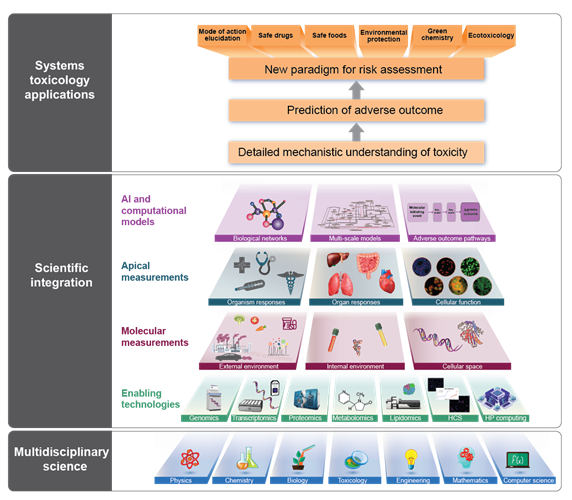 Integrating classical toxicology with quantitative analysis of the molecular and functional changes induced by toxicants, systems toxicology relies on the latest technological developments in both experimental and computational sciences (Sturla et al., 2014).